Is the Comforter mentioned in the Bible actually Muhammad? 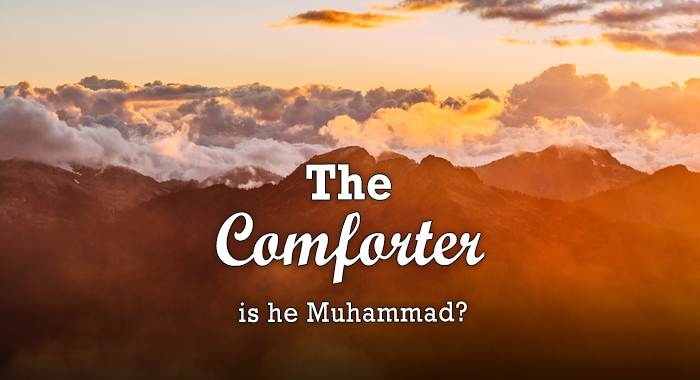 In the Bible, we are told of a Comforter who would 7come after Jesus. This Comforter would have very specific roles. Many times I hear that this Comforter is supposed to be Muhammad. Today, let us examine these claims and discover whether they are true.

According to the Bible, who is the Comforter?

The Comforter is called the Spirit of Truth.

Jesus says, "But when he, the Spirit of Truth comes, he will guide you into all truth" John 16:13. This means everything the Comforter said and did would have to be truth. Not subjective truth that one person could decide was right and another person could decide was wrong, but absolute truth which would remain so regardless of culture or historical context. Did Muhammad do this? The answer here would have to be no. Muhammad allowed his men to kill and enslave their enemies. The Comforter says we are to love our enemies and bless those who curse us. Jesus said this in Matthew 5:44 and the Comforter agrees. This one example is enough to state that, because Mohammad did not always point people to truth, he could not be the Comforter written of in the Bible.

The Comforter will not speak on his own.

Jesus further describes the Comforter by saying, "He will not speak on his own, he will speak only what he hears, and he will tell you what is yet to come" John 16:13. When this was written, Jesus was saying that the Comforter would be speaking to His disciples telling them of what is yet to come. Historically, Muhammad never saw the disciples of Jesus, let alone spoke with them, so there is no way he could be the Comforter Jesus spoke concerning.

The Comforter would be eternal.

In John 14:16 Jesus says, "And I will ask the Father and He will give you another Comforter to be with you forever – the Spirit of Truth."

Historically, we are very aware that Muhammad was born at some point around 570 A.D. and that he died around 632 A.D. This statement alone which was made by Jesus disqualifies Muhammad from being the Comforter.

The Comforter would be "in" the disciples.

Jesus says in John 14:17, "But you know him for he lives with you and will be in you." Only a Spirit can dwell inside a man. Muhammad was a man therefore could never dwell inside another man.

The Comforter would be sent in Jesus' name.

Muhammad was never sent "in Jesus' name but rather came with his own mission and his own "revelations" which he claimed were from God. Because he did not come in Jesus' name, he could not be the Comforter.

The Comforter would remind people of what Jesus said.

Jesus states, "But the Comforter... will teach you all things and will remind you of everything I have said to you" John 14:26. Again, Jesus was talking to the disciples. Muhammad could not possibly be the Comforter because he was not born when the disciples were living. Another reason why Muhammad could not be the Comforter is because he did not remind people of what Jesus said, but rather contradicted many things Jesus taught. An example where Muhammad contradicts the teachings of Jesus is where it comes to the treatment of enemies and slaves. Jesus taught people to love their enemies and treat servants like brothers. Muhammad taught that enemies should be given an opportunity to repent and if they didn't they could be killed and slaves were to be treated like cattle if the owner desired to do so (see Qur'an 5:33, 8:12, and 9:5). Again, Muhammad is disqualified from being the Comforter.

The Comforter would be a spirit.

Jesus said, "But the Comforter, the Holy Spirit whom the Father will send in my name, will teach you all things and will remind you of everything I have said to you" John 14:26 (emphasis mine). Jesus clearly called the Comforter a spirit and not just a spirit but the holy spirit. This means the Comforter would be righteous, perfect, and Holy as God Himself is holy. Because Mohammad was a man and no a spirit, he could not be the Comforter.

The Comforter would testify of Jesus and He could be sent first to the disciples.

Jesus said, "When the Comforter comes, whom I will send to you from the Father, the Spirit of truth who goes out from the Father, he will testify about me" John 15:26. Did Muhammad testify of Jesus? Did he remind his followers of what Jesus said and did? AND did he do these things first with the disciples of Jesus? The answer to each one of these questions is a resounding no. He told stories about Jesus but contradicted Jesus's claims. When speaking to his followers, he was not teaching them about Jesus. And, again, he was not born anywhere near the time of Jesus' disciples and could not have been sent to them.

The comforter would bring glory to Jesus.

Jesus states, "He will bring glory to me by taking from what is mine and making it known to you" John 16:14. Muhammad did not take from Jesus and give to his followers teaching and ways of living which were in accordance to Jesus' teaching and living. Muhammad gave his followers a different way of living and different rules to live by which Jesus would not have been pleased with. He therefore did not bring glory to Jesus and cannot be the Comforter of which Jesus spoke.

Comments
#1 Hellani 2017-12-14 07:43
I would have to say Prophet Muhammad is the comforter.If you think about it Holy Spirit was here when Jesus was around. Also in the Bible says HE 8 different times.John Chapter 16 VS12 Masculine
Quote
Refresh comments list
RSS feed for comments to this post
Add comment
Please note: Any comment containing profanity or hyperlinks will not be published. Thank you.
JComments

We have 406 guests and no members online