Hell – Are you destined to it? 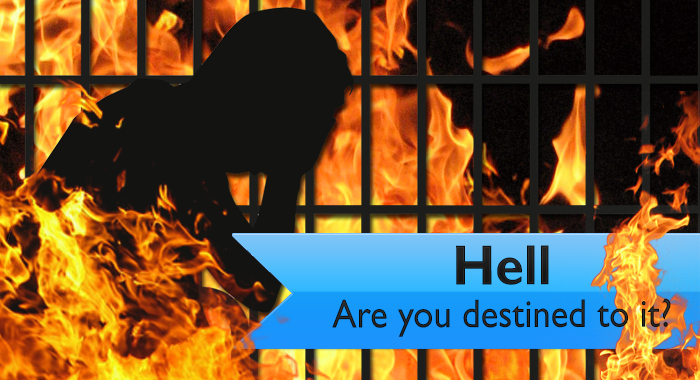 The Bible says NO! Hell is a place that many are terrified to even think of.  Is it real?  Does it exist?  If it does, why does God allow it?  Will people go there based on their works or beliefs?  These questions are all answered by the holy books of Christianity and Islam. The Bible and Qur’an both acknowledge the existence of hell, its purpose, and how one can escape from entering its fiery grasp.  Both, however, are very different from each other.  If that doesn’t scare you, it should!  Because they both cannot be right and you had better be sure you know which one to believe in!

According to the Qur’an, every guilty man will go to hell – every guilty man. Muslim, Christian, Buddhist, Hindu.  Wait, even Muslims?  Yes.  If you are guilty of shortcoming or sin before Allah, then you, too, are destined to hell and dwelling there forever.  Just because you claim to follow Allah and his prophet, simply calling yourself a Muslim does not guarantee you escape from hell.  What does Allah require?  Praying during five specified times each and every single day of your life.  My Muslim friend, have you done this?  Have you faithfully prayed five times a day every single day of your existence?  If not, you are in danger of hell because you are guilty according to the Qur’an.  Muslim women, have you made sure to make up prayers when you could not pray due to your monthly cycle?  If not, you are in danger of hell.  And this is only one requirement of the five pillars required of every Muslim.  The Qur’an does not say if you claim Islam you will be guaranteed protection from the fires of hell.  It says anyone who is guilty before Allah will go there.

The danger for you, regarding this, is that those who enter hell NEVER leave.  Even Muslims who go there will never leave according to the Qur’an.  Sura 11:98 says, “He will go before his people on the Day of Judgment, and lead them into the Fire (as cattle are led to water): But woeful indeed will be the place to which they are led!”  He will lead his people into the fire.  Will they ever come out?  No.  Sura 20:74 states, “Whoever comes to his Lord (being) guilty, for him is surely hell; he shall not die therein, nor shall he live.”

You, my Muslim friend, are in danger of this because you are guilty of sin before God.  No one can be perfect.  By this realization, even the prophet of the Arabs, Muhammad himself, was not guaranteed to enter paradise.  He was not perfect therefore he also was in danger of hell.  Remember the Qur’an merely says ‘guilty’ not kafir or infidel.  Even if you are a Muslim, if you are guilty of the smallest infraction, you are destined to hell.  And if you go there, you will never get out.

The Bible declares that the punishment for sin is death and hell.  All who stand guilty because of sin before a Holy and Just God are going to hell.  Period.  But there is a difference.  There is a guarantee of completely by-passing hell to dwell in heaven and a promise of eternal resurrection for those who desire it.  According to the Bible, Jesus Christ, the Messiah of God, is the only perfect one to walk the face of the earth who willingly took the punishment for our sin, a punishment we rightly deserve.  And it is by placing faith in the work that He did on our behalf that our sins can be forgiven.  The Bible declares in John 3:16-18, “For God so loved the world, that he gave His only begotten Son, that whosoever believeth in Him should not perish, but have everlasting life. For God sent not His Son into the world to condemn the world; but that the world through Him might be saved. He that believeth on Him is not condemned: but he that believeth not is condemned already, because he hath not believed in the name of the only begotten Son of God.”

When we believe in Jesus Christ and believe on the work He has done on our behalf, we immediately become children of God and are part of His family.  Our sins are forgiven and we are made righteous before Him.  Our standing before God will mean heaven for eternity.  Man, woman, boy, girl, former Muslim, Atheist, or Hindu.  No matter who you are or what you used to believe, if you come to Jesus Christ and trust Him and rely on His work for your salvation, you are not only guaranteed to escape hell, but you are guaranteed eternity in heaven!  “And this is the record, that God hath given to us eternal life, and this life is in his Son.  He that hath the Son hath life; and he that hath not the Son of God hath not life. These things have I written unto you that believe on the name of the Son of God; that ye may know that ye have eternal life, and that ye may believe on the name of the Son of God” I John 5:11-13.  Jesus Himself said, “And I give unto them eternal life; and they shall never perish, neither shall any man pluck them out of my hand.” in John 10:28.  My friend, who will you follow?  A prophet who did not know if he was destined to hell or heaven?  Or the One who not only guarantees eternal life but makes it possible for you to obtain?