Do Christians Believe in the Qur'an? 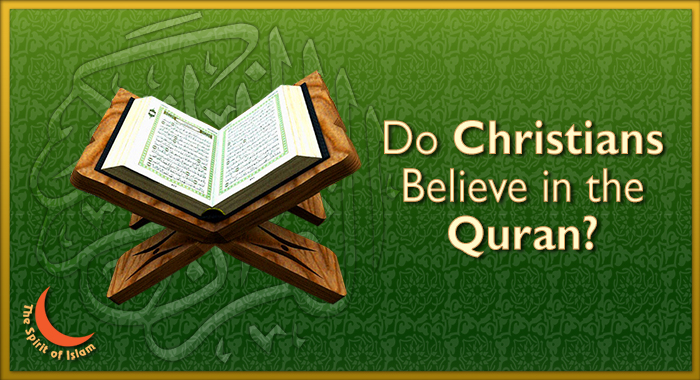 There is a lot of talk these days (and a fair bit of arguing) about whether Christians and Muslims are one and the same. Do we worship the same God even though we adhere to different ideas and read different books? Are we really just one underneath all of the politics and talking heads? Are all Muslims terrorists and all Christians hatemongers? Well, let's take this question one step at a time and start with this - do Christians believe in the Qur'an?

In order to effectively answer this question, I must ask several more. Do Christians believe that the sky is blue, that we need oxygen to breathe, or that Shakespeare wrote Romeo and Juliet? The answer to the last few questions, of course, is a resounding 'yes.' Let us then consider one more question. Do we believe the values and morals contained in Romeo and Juliet is what we should base our lives upon? Of course not. No more than we would read a washing machine manual for insights on how to live our life. So, though I will say that we believe the Qur'an, I am saying no more than that we believe it is indeed a book, authored by someone at a certain point in time which has been compiled and is now listed in the annals of human record. Do we believe it holds truth pertaining to life and eternity, however? That, my friends, is a resounding 'no.'

And thus we have the first issue in that 'Aren't we all the same?' question. For Muslims, the Qur'an forms the very bedrock upon which the Muslim life and religion stands. Along with the Hadith, it informs Muslims on every notion from how to please Allah to how many wives to marry to how to treat said wives to fulfilling "needs" when those wives no longer satisfy . It records the "five pillars" which need to be adhered to in order to be a good Muslim. The Qur'an forms the foundation, building blocks, walls and ceiling to the religion and house of Islam. Without the Qur'an, there would be no Islam.

Similarly, in Christianity, the Bible forms the grand total of our entire basis for religious belief. It is the lifeblood of Christianity. It tells us how to treat our neighbors, informs us of historical events, and gloriously proclaims the gospel of Christ which tells us that God Himself came down to this earth, lived a perfect life among imperfect people, took away the punishment of our sins by dying on the cross, and proved He was God and that He triumphed over death and sin by rising from the dead. The entire Bible points to the Gospel, points to God's redemptive plan for humankind. It is not works based, but entirely dependent upon what God alone has done. Our salvation comes through faith alone in the work of God through Jesus Christ on the cross. I cannot emphasize this enough because the greatest underlying difference between Christianity and Islam, and that which sets it so dramatically apart, is the varying belief in what salvation is and how to obtain it.

For a Muslim, the Qur'an tells them that the only way to know for sure they are going to paradise, is to become a martyr in jihad for Allah (holy war). The other option is dying immediately after completing the Hajj, as this is the only moment you are guaranteed to be free of wrong doing. If you are a Muslim and you are reading this, ready to argue, please tell me if there is another way - for I surely have not found it. Muhammad did not even know if he would go to heaven. If this is assurance, I do not want it! Muslim friend, I think if you are really and truly honest with yourself, you will admit, the Qur'an gives no absolute 100% guaranteed way of entering paradise. And that is just for you, men! It doesn't even MENTION women! So women readers, why you are a Muslim and where your hope lies is beyond me. I understand that it is how you have grown up or it possibly attracts you because of the different religious practices put in place, but eternally, where is your hope? The only "women" mentioned in heaven are houris who aren't really you, just infinitely virgin female beings who will give pleasure to your husband once he arrives. If he arrives.

For a Christian, the eternal outlook is vastly different. The Bible clearly and simply states that the guarantee of spending eternity with the One we worship is so easy a child can be assured of it. "For God so loved the world, that he gave his only begotten Son, that whosoever believeth in him should not perish, but have everlasting life. For God sent not his Son into the world to condemn the world; but that the world through him might be saved. He that believeth on him is not condemned: but he that believeth not is condemned already, because he hath not believed in the name of the only begotten Son of God" John 3:16-18. "Jesus saith unto him, I am the way, the truth, and the life: no man cometh unto the Father, but by me" John 14:6.

Comments
+3 #5 Lydia Nesser 2016-04-27 23:42
As stated previously, I think this title isn't very fitting for the topic at hand. The author poses an interesting question of the afterlife. I would answer that one's belief should not be solely based on what they might receive upon death, but rather living with the knowledge that one has done all they could to satisfy their religious beliefs in life. A person should not follow a religion simply because they think they might be rewarded in the end, but because that person honestly believes in the teachings of that religion.
Quote
+3 #4 Annika Koch 2016-04-27 16:34
I believe that Christians do not believe in the Qur'an as a holy book for Christianity. While there are some people in both the Bible and Qur'an, the ideas of the religions are vastly different from each other.
Quote
+1 #3 R.Elsayed 2016-03-28 03:54
IN my viewpoint, this is a silly question! It is like asking: Does a vegetarian eat meat?
Of course, and logically, Christian DO NOT Believe in the Quran! and if they did, they wouldn't be Christians.
I need an answer please ASAP.

By the way: I am a Muslim.
Quote
+3 #2 Tim 2016-01-02 22:41
Peace All, in the name of Yashua-Christ messiah. The question matter,is not,(Do Christians believe in the Quran), but in contrast, (What Do Christians believe about the Quran). Historically to state,surly through Islamic authorship,Hadith, basically,the Sun-nah of Islam,we not only as believers of the Word of God,which means "Dabar or speech", believe Muhammed did exist, and established a caliphate moment.. But the strange historical paradox of our muslim friend's claims,of Muhammed be "the last prophet, in the line of Biblical prophets does not support his lineage for many non realized scriptures,of our muslims friends..(Pslam chp 2-Jesus in the expressed person of God),(Genesis 2:17-Penalty of Sin,which was DEATH,needing blood of some righteous-Yashua-Jesus, not man's general asking of forgiveness)to defeat "Sins" penalty upon us..(Deuteronomy 18:15, not certain if Muhammed understood the word.BRETHEN-means national origin) not gentile,Arab,or Persian descent..AT THIS BIBLICAL TIME..
Quote
-2 #1 William 2015-12-21 21:10
If you are confused about which god to believe and follow just talk to both of them and which over answers follow him.
Quote
Refresh comments list
RSS feed for comments to this post
Add comment
Please note: Any comment containing profanity or hyperlinks will not be published. Thank you.
JComments

We have 80 guests and no members online